In the February, 1990 issue of Turning Wheels Feature Editor, Fred K. Fox provided a little background on the word wheelcover. Fred noted that the double word "wheel cover" was used in a sales flyer sent to him by Studebaker Drivers Club member, Terry Judd. He noted that the company, Lyon Inc., which manufactured the wheelcover and issued the flyer, stamped the one word "WHEELCOVER" on many of its covers. That same issue carried a letter by Gordon Mills who stated: "I believe the name "wheelcover" originated with the Lyon company in the middle 1940's..."

One prototype and three production wheelcovers were associated with 1956 Golden Hawks. The Chassis Parts Catalog refers to these wheelcovers as "CAP & DISC, hub" and follows each listing with a more definitive description. Their South Bend and Los Angeles (Vernon) accessory codes and the wheelcover descriptions are listed below:

Since Studebaker assigned their accessory codes (AC-nnnn) in sequence, it would follow that the prototype wheelcover was being considered after the standard wheelcover was developed and prior to the introduction of the spoke type.

The Los Angeles accessory codes were supplied by Turning Wheels Almanac Editor, Richard Quinn. It is interesting that the Los Angeles codes for the first two wheelcovers are not in sequence. The earlier wire wheel type is code 63 while the later standard disc is code 62.

Thanks to Dennis Lambert and Newman & Altman, I had the opportunity to review the production orders for 1956 Golden Hawks in the fall of 1993. That review provided some interesting results. 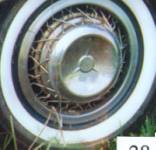 The wire wheel option AC-2425 had been available since 1953 and was standard equipment on the 1955 Speedster. Many people, in fact, refer to it as the "Speedster Wheelcover". Sometime in late 1955 or early 1956, production on this wheelcover was discontinued and this option ceased to be available. An article by Frank Peerman on page 4 of the Spring, 1975 issue of The Southeastern Wheel, suggested that the supplier, from Detroit, went out of business.

A letter appearing in the February, 1990 issue of Turning Wheels by Studebaker Drivers Club member, Terry Judd, indicated that this was not the case. Terry, who would later serve as the SDC President (1991-1993), stated that the wheelcover supplier was called Lyon Inc., and was located on Chicago Boulevard in Detroit.

Terry goes on to say that Lyon Inc., was founded by his grandfather, George A. Lyon. He adds that the firm was family owned until 1967 when it was sold to Rockwell-Standard. That being the case, the company did not go out of business in 1955, so the reason for the demise of the wire wheel Speedster wheelcover remains a mystery.

The wire wheel AC-2425 wheelcover appeared on 43 production orders for South Bend produced 1956 Golden Hawks. This total includes 7 cars which had the AC-2780 prototype option crossed out and replaced by AC-2425. The South Bend production orders with the wire wheel option had Final Assembly Dates ranging from November 2, 1955 to December 20, 1955. The range of serial numbers ran from 6030049 through 6030930.

No matter what went on at that time, the result is that this option actually appeared on more Los Angeles production orders (57 out of 601) than it did on those from South Bend (46 out of 3472).

Although this wheelcover is quite popular today, it is interesting to note that the 103 total, represents only 2.5% of 1956 Golden Hawk production (4073 units). It is quite possible that more 1956 Golden Hawks exist today with the AC-2425 wire wheel option than were delivered new. 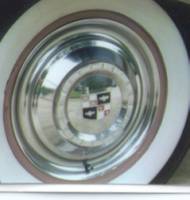 Wheelcover, AC-2738 was standard equipment on all 1956 Studebaker Golden Hawks and featured the Studebaker shield emblem in the center. This cover was only used during the 1956 model year. A slightly different version of this cover was introduced for 1957 as accessory code AC-2841.

Although this was the standard wheelcover, many production orders had no wheelcover option of any kind. This was especially true, but not in every case, of those cars which were destined for export, including Canada. 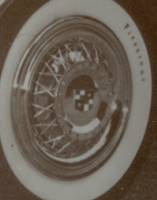 According to an article by Feature Editor Fred K. Fox in the April, 1985 issue of Turning Wheels, AC-2780 was a prototype only, and never made it into production. The prototype was most likely being considered as a replacement for the wire wheel, AC-2425 which ceased to be available.

All the above information on the prototype wheelcover pertains to 1956 Golden Hawks produced in South Bend. As stated earlier, a different accessory code identification was used on production orders for Los Angeles assembled 1956 Golden Hawks. I could not find anything to suggest that the AC-2780 option had a Los Angeles coded counterpart.

Even though this option appeared on 84 production orders, there is no evidence that the wheelcover was ever put into production. It is not listed in the "Parts Catalog" for 1956, which does include the later AC-2799 spoke type, and I have not seen it listed in any accessory catalog. It does appear on a few factory photos however and the 84 total is only 19 less than the number of wire wheel Speedster wheelcover AC-2425 option appearing on the production orders for 1956 Golden Hawks.

The wire wheel overlay actually appears to be an overlay which was mounted on top of the standard AC-2738 wheelcover. If so, it is then possible that the overlay was simply not added, and the car then came equipped with the standard wheelcover. Unless some new documentation turns up, that is something we will probably never know. 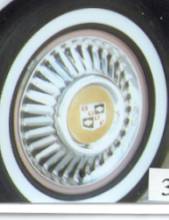 Thanks to Richard Quinn, I have learned that the Spoke Type wheelcover, AC-2799 was introduced via Sales Letter No. 63 on February 7, 1956. This Sales Letter also indicates that "Effective with the release of these spoke type discs, wire wheel discs (AC 2425) will no longer be available as a factory installation." The letter gives no indication as to the reason.

Studebaker also supplied a Factory Dealer Announcement dated February 21, 1956 coded by the factory as "S84 (2-21-56)" which introduced the new Spoke Type wheel disc. Strangely, this announcement authorized the use of the new disc for all cars dating back to 1953. This was most certainly a gimmick by Studebaker to sell more wheel discs. I assume they justified their action because the spoke type wheelcover was most likely meant to replace the wire wheel wheelcover which, as stated previously, had been available since 1953.

Whatever Studebaker's motive, I think most car restorers and hobbyists, feel that options which were not available at the time the car was produced are not authentic. Carrying that philosophy a step further, would a 1956 Golden Hawk produced before February 7, 1956, be considered authentic if it has the spoke type wheelcover? I'll leave that decision up to the purist.

As is the case with the wire wheel option AC-2425, the optional spoke type wheelcovers are also very popular among 1956 Golden Hawk owners today. Their appearance on the production orders, however, is also a relatively low total comprising less than 5.8% of the 4073 total 1956 Golden Hawk production.